Tuesdays with Dori’s recipe for this week was flat bread, but I didn’t exactly get flat bread.  What I had was good and we ate it all, but it wasn’t very flat.

I only made half the recipe because there are only two of us and it said this was best eaten when just baked.  Since I was only making half the recipe I decided to let my Zojirushi bread machine do the kneading, which worked out fine.

I put the dough in the refrigerator to rise because I had to leave for several hours, then took it out of the refrigerator and let it sit for about an hour and a half before shaping and baking.  Half the recipe made four naan.   I don’t have dough stamp or a pastry docker as was recommended in the book, so I used a fork to prick the dough full of holes.  The dough was warm and my kitchen was warm, especially since I was preheating the oven to 500 degrees AND it was over 80 degrees outside, so it seemed the dough rose up almost as fast as I rolled it out. 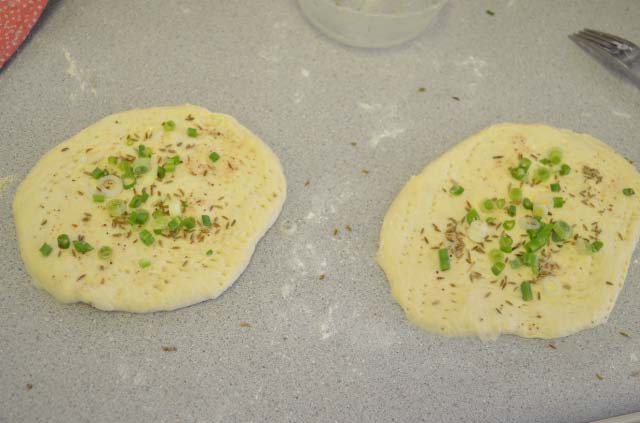 I do have a baking stone and so I baked them directly on the stone.   It was still edible the next day, but it is at it’s best right out of the oven.  I love the taste of cumin, so I was generous in sprinkling it on the top of the bread.

This naan recipe was contributed to the book by Jeffrey Alford and Naomi Duguid.  I have a Dal recipe of theirs that I printed from the Food Network in 1997!!!  Wow that’s old for the internet.  So we had Oasis Naan and Dal for dinner.  I checked and the dal recipe is still available on the Food Network site,  Lentils with Garlic, Onion, and Tomato.   I always make it with yellow dal.  They look like yellow split peas.  My first yellow dal was purchased at an Indian specialty store, but I have also found it in my local health food store.

About Created by Carlene

I am retired and live in Southern California with my husband, two black cats, Sadie and Samantha, and Thor the Standard Poodle mix.
View all posts by Created by Carlene →
This entry was posted in Baking, Tuesdays with Dorie. Bookmark the permalink.